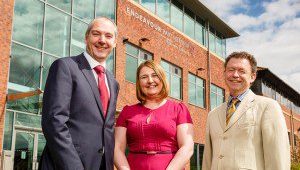 Located at Teesdale near Stockton, the commercial legal experts are on track for faster growth than anticipated as people begin to invest in quality legal advice again following the recession. The firm is ahead of predictions to double its £2 million turnover in the coming five years.

Endeavour Partnership has announced a restructuring of its team as it steadily increases in line with growth. As a whole, the business now employs 44 people.

Following the appointment of managing partner, Paul Bury, at the end of last year, Sharon Hutchinson has now been promoted to practice manager- responsible for all non-legal aspects of the business- and Nick Dent, a chartered legal executive with more than 20 years’ experience, has joined the commercial litigation and insolvency teams due to a rapid increase in work.

Four new support roles have been created across all departments to assist with administration and accounting, including two secretaries who have joined the team from Endeavour’s neighbouring legal firm, Bond Dickinson.

In addition, Endeavour Partnership has a longstanding reputation in retaining and recruiting trainees and apprentices. Two new apprentices have recently joined the team with Hollie Crossan and David Wilkinson taking on roles providing administration support across the whole of the company.

Endeavour Partnership was launched in 1999 by four partners who saw the need for a law firm to provide purely commercial legal services. The company has continued to grow from six fee-earners at inception to 21 in total.

Managing partner, Paul Bury, said: “The commercial legal sector has faced some challenging times in the post-recessionary climate and it is an exceptionally competitive marketplace. However, we have nurtured our clients, our reputation and our team and have continued to thrive.

“The first six months of this year have been our most successful to date as we continue to recruit new staff, promote current team members and take on new contracts. We are certainly on target to double our turnover in the next five years and continually create a variety of opportunities for people in the North East.”

Today the team are with @Jeni_Smith_of @NetKno , learning about networking and how to get the best out of it! https://t.co/fwVPry5n4x